Marching on to April

HoHemGeee y'all...
@ that girl they call MPB...it's not your fault o! Get that big ol' log out of your eye cuz you ain't blogged neither *side eye*

Sho been a while innit? I tire sef with the excuses..I suck..I accept it and I will go put myself in a corner.

ooooh oooh!...Ok..yes i am obsessed with my nephews (#1 more than #2 for now but give me time)
#1 is a total clown! He's also 2 going on like 16!
Apparently, the other day he wanted some milk and his dad was making it for him. So he was following his dad around the kitchen saying "that's not even mine". His dad ignored him until he went to hand him the bottle of milk only to realize he had used a baby bottle instead of his regular sippy cup.
His mom now says "You should have listened to your son"
Why did my nephew now say "Yea..I'm a genius!"?

I died! That boy is just too much!

What's new you say?
Well...i finished the 5K program (bring it killer) and I was gonna start the 10K program but mehn...no motivation..my music sucks, i decided i dont like running on the treadmill that much...so i'm just gonna stick to the classes and work on incorporating weight training into my exercise routine.


I woke up the other day realizing that i'm getting old! Almost 30 y'all...It's time to take my world domination plans to the next level...watch this space! 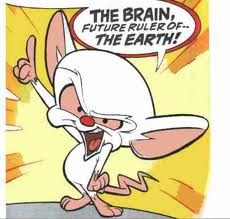 For my birthday, I'm going to see Cirque! finally..I hope it's not wack. You know what else was not wack? Rango...yes..Rango..I laughed, I almost cried..I loved it! It was a lil slow in some parts but all in all...not bad.

My April goals are to take care of all my health stuff and I made my appointments so yay me!

Oh..I updated MoK8....finally...not really feeling the part II (lacking inspiration) but I promise the part III will be naice...I think..

It's almost April y'all...the best month EVER! When all the best ppl are born :)
I hope everyone has a wonderful April! I know I will!

I have followers? When did that happen?

Kate
United States
I'm an aries, so that means i'm stubborn. I'm quiet..maybe not as trusting as a should be. I have big dreams that I've been slacking on lately. I'm trying to take a more insightful look at my life and change for the better. I love my country (Naija) and all the wonderful people I've met that are trying to make a difference.